Obstructive sleep apnea and hypopnea syndrome (OSA, OSAS): Obstructive Sleep Apnea means pause in breathing due to a temporary obstruction in the throat during sleep. It is considered significant if it lasts for more than ten seconds at a time and occurs more than five times per hour. The term Obstructive Sleep Hypopnea means shallow breathing during which you have partial obstruction in the throat. Hypopnea produces the same ill-effects in the body as the apnea. Some people may have poor quality sleep and daytime sleepiness even if they have less than five apneas and hypopnea per hour. They may have a different form of obstructive sleep apnea called upper airway resistance syndrome. This type of sleep apnea leads to recurrent interruption in sleep without much decrease in blood oxygen level.

People with a more severe problem may stop breathing for more than two (2) minutes at a time (The two minute figure is not a misprint). These spells can occur more than 100 times per hour. There can be associated drop in the blood oxygen level, which may be so severe that it even decreases to values less than half the normal.

How Is Sleep Apnea Diagnosed? A thorough examination by a physician is a must. Your physician may do some preliminary testing such a blood test to rule out hypothyroidism (low thyroid).

Obstructive sleep apnea is best diagnosed with a sleep study called overnight polysomnogram. A sleep study is an evaluation of various aspects of your sleep. With this test we can analyze quality and quantity of sleep as well as heart and breathing functions during sleep. The sleep studies are used to diagnose and properly treat Daytime Sleepiness, Sleep apnea, Restless Legs, Narcolepsy, Abnormal Behavior during Sleep and other sleep-related conditions.

Your physician may opt to send you for a home screening test for sleep apnea. If you do have this testing make sure that the test is interpreted by a qualified physician who also has access to a sleep laboratory.

What Causes Obstructive Sleep Apnea? The muscles in our body become relaxed when we go to sleep. This includes the muscles in the throat. For some people the throat muscles relax too much and cause closure of the throat or a severe narrowing causing apnea or hypopnea. Some people have a narrower than normal throat and the closure occurs more readily. Such people may have enlarged tonsils and adenoids (especially children), large tongue, an abnormal soft palate or smaller upper or lower jaw. Alcohol, opioid pain killers, tranquilizers and sleeping pills further relax the throat muscles during sleep and make it more susceptible to collapse. Many but not all people with sleep apnea are overweight and have narrow throat as a consequence. Untreated hypothyroidism (low thyroid), acromegaly (excess growth hormone), excess body fluid, heart failure and kidney failure can cause obstructive sleep apnea. The fluid retention due to heart or kidney failure and any other cause can lead to fluid shift into the throat when people lie down. This leads to narrowing of the throat during sleep. The heart or kidney failure also leads to a different type of sleep apnea called central sleep apnea because the heart has to deal with fluid overload.

What Happens To Our Body Because Of Obstructive Sleep Apnea? The breathing is noisy and labored. When the throat closes obstructs completely it blocks off the airflow. The spouse or bedpartner may report snoring interrupted by pauses during which the person is unsuccessfully trying to inhale. Because of these pauses, there is an interruption in sleep during which the muscles in the throat start working again. The throat then suddenly becomes unblocked and there is a loud snorting or gasping noise as the air gushes into the lungs. The awakenings from sleep are generally very brief and the person may not remember them in the morning. The oxygen level in the blood may decrease. The blood pressure increases at night and eventually it may begin to remain elevated during the day. The heart muscles have to work harder against the increased pressure in the chest during these apneic spells. Over the years this may lead to heart failure. The heart may slow down or stop altogether for several seconds during the apneic spells. The heart beat can become dangerously irregular due to sleep apnea. The dangerous heart rhythm may be the cause of death during sleep in the case of some people.

What Do People With Obstructive Sleep Apnea Complain Of? A major consequence of obstructive sleep apnea is excessive daytime sleepiness. This is thought to be due to disturbed sleep caused by repeated arousals and loss of deeper levels of sleep and also because of the effects of low blood oxygen on the brain functions. Some people are not aware of their nighttime sleep disturbance even when they are very restless sleepers. Others may complain of insomnia. They usually wake up feeling unrefreshed and may “fall asleep anywhere anytime,” or they may doze off easily if they allowed themselves the opportunity to do so. They may doze off inappropriately – at work, in company or while driving. People with obstructive sleep apnea are 2 to 3 times more likely to have automobile accidents. They may wake up frequently to urinate – sometimes every hour. Some of these patients end up multiple cystoscopies due to frequent urination. Some wake multiple times drenched in sweat. Night time heart burn is quite common. Some may have abnormal behaviors including walking, talking, shouting, screaming, eating, flailing and aggression during sleep. Some may have abnormal sexual behavior while asleep leading to legal difficulties.

They may become irritable, depressed, anxious or forgetful. They may develop decreased attention and concentration. There may be a change in personality. These symptoms may develop suddenly or slowly over a period of long time. The interest in sex is decreased and men may complain of erectile dysfunction. Many people have morning headaches. Some may feel “drunk” or disoriented in the morning.

About 3% children have obstructive sleep apnea. They may be misdiagnosed as having attention deficit hyperactivity disorder. The academic performance suffers. They can be irritable. The may start wetting the bed although they had no such problem before they developed sleep apnea.

Obstructive sleep apnea can be associated with decreased enjoyment of life and shortening of life span. 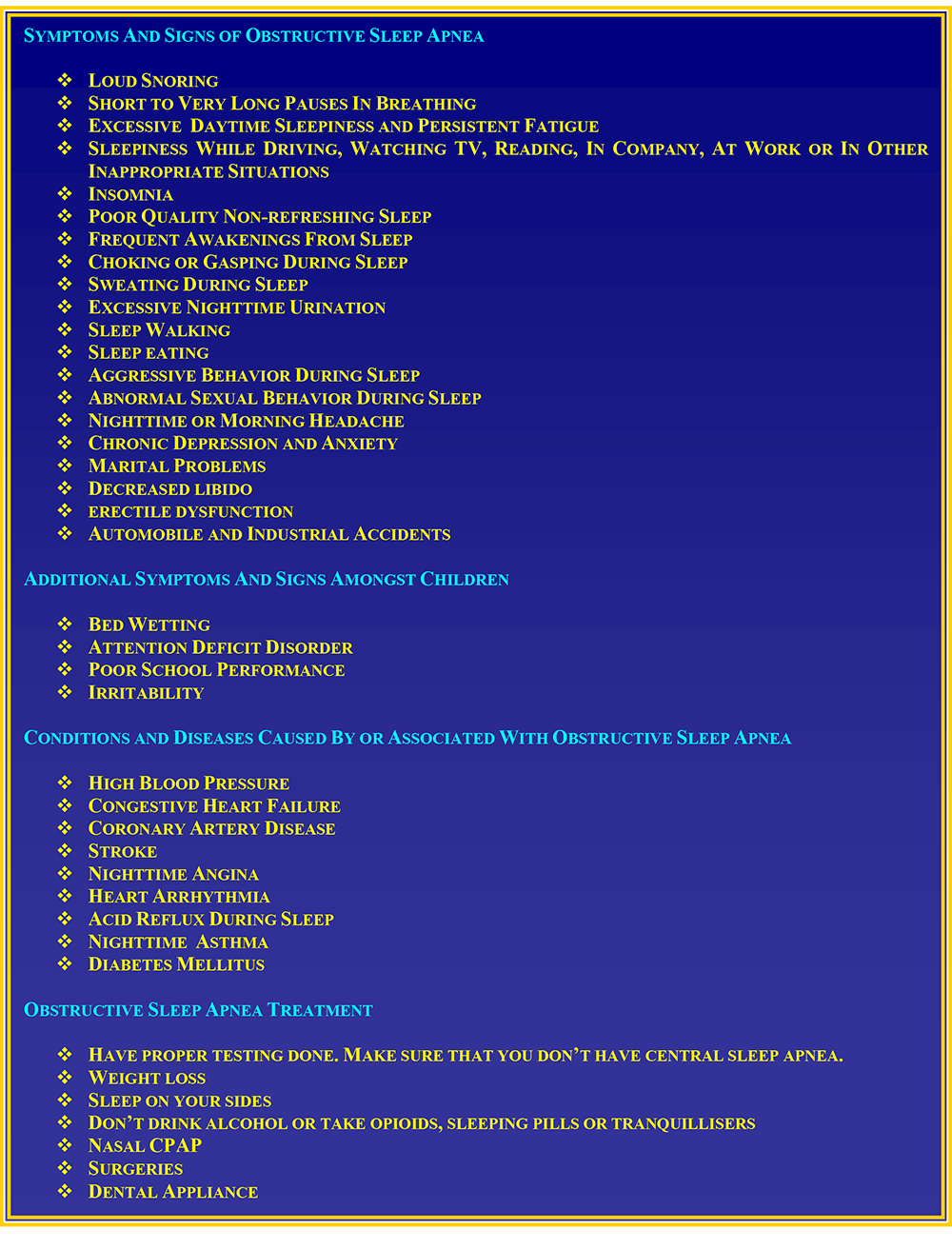 How Is Obstructive Sleep Apnea treated? Adequate weight loss may cure this problem for certain people. Since sleep apnea occurs due to obstruction of upper airway while a person is asleep, the aim of the treatment is to reverse that obstruction with the help of a special ‘respirator’ called CPAP machine or with a dental appliance. Permanent relief of this obstruction with surgery is also possible but surgery does not always work, particularly, when the apnea is severe.

Weight loss, sleeping on your sides and avoidance of alcohol: If you are heavy and are able to decrease your weight by 10 to 15%, the apnea will decrease by one half. To lose weight you have to decrease your total food consumption and substantially decrease the starch and fat consumption. Many people consume too much fat in the form of dairy products, red meat products, fried foods and desserts.

Sleeping on your sides may decrease apneas. You can use commercially available T-shirts to help do that. Sew up a pocket on the back of your pajama tops and sleep with a rolled up thick sock or tennis ball in it.

Nasal CPAP (Continuous Positive Airway Pressure) machine: This device controls sleep apnea for almost everybody but about 30 to 40% people don’t tolerate it well, at least initially. However, CPAP device is the only treatment that works for many people with sleep apnea.

CPAP titration study: We can test you in the Surrey Sleep Laboratory to find the correct CPAP settings. This testing is the best way to find out the optimum settings.

Surgery: The surgery on palate is effective about 50% times in decreasing or eliminating mild or moderately severe sleep apnea. Severe sleep apnea responds less often. When this is followed by surgery on the upper and lower jaw (Maxillo-mandibular advancement), the cure rate improves further.

Dental appliance: This type of appliance is worn before going to sleep. They control sleep apnea by pulling the jaw or tongue forward, depending on the type of the device used. They have been shown to be effective in controlling mild or moderately severe sleep apnea in about 60% patients. The jaw advancing devices work in some patients with severe sleep apnea as well. Your dentist will need to follow you on a long term basis to monitor for any change in your dental bite.